"Great experience, everyone evolved was more than helpful throughout the whole process! 5 stars!" - Aaron D.

Another Brownlow Medal Awards is in the books and it was another unsurprising victory for the heavy favourite. News.com.au goes in-depth on the night’s awards.

TOM Mitchell strolled into Melbourne’s Crown Casino as the heavy favourite and walked out with the Brownlow Medal around his neck.

The Hawthorn superstar polled 28 votes, the lowest since Matt Priddis in 2014, to claim the honour ahead of Collingwood’s Steele Sidebottom.

Along with the surprise packet Sidebottom was Melbourne’s Angus Brayshaw who bolted home to finish third overall.

Dustin Martin’s record 36 votes are safe for another year, but there were some records that did tumble on the big night.

Joel Selwood polled 14 votes on Monday which takes his career tally to 195, enough to place him sixth all-time.

Unfortunately it also means he’s now polled the most votes without ever being handed the top prize.

His teammate Gary Ablett also entered the record books after also polling 14 votes, taking him to the all-time lead on a staggering 248 votes.

Sydney’s Nick Smith makes it in after once again failing to poll a single vote and extending his drought to a record-equalling 191 games. He joins Geelong’s Tom Lonergan for the most games without a vote.

The ball magnet makes it Brownlow Medal number six for the Hawthorn football club after he burst out of the blocks with three best on grounds before a slow patch in the middle of the season.

A serious challenge from Collingwood’s Steele Sidebottom had many on the edge of their seats, and even Mitchell admitted there were some nerves around.

“Steele obviously had a tremendous season and envious of him this weekend that he is able to play in a Grand Final. He had an outstanding year,” Mitchell said. 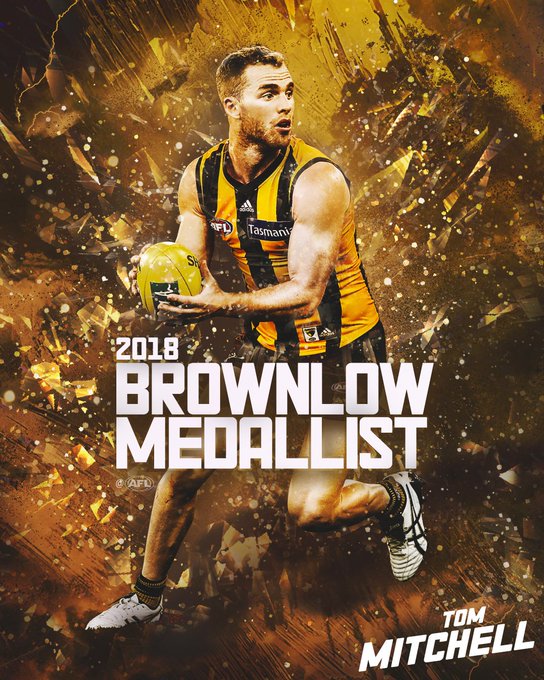 His spectacular 2018 season saw him average 35.3 disposals a game while he also amassed 40+ touches on 11 occasions.

In total he accumulated a total of 786 disposals from his 22 home and away games while claiming a host of media awards.

Mitchell was the heavy favourite entering the night in Melbourne and beat out Sidebottom and late Melbourne bolter Angus Brayshaw.

The tireless midfielder was full of praise — when accepting the award — for his girlfriend Hannah who changed up his diet.

“In summary my diet wasn’t too flash. Pre-game routine consisted of a box of BBQ Shapes and Kit Kats. I am on a strict salmon diet,” he said.

“She is the reason that I am standing up here. She has helped me enormously and made sacrifices and she is there for the highs and lows and I can’t thank her enough for what she has done for me.”

Of course his coach Alastair Clarkson provided the laughs when Mitchell began his speech and the camera panned to Clarko who appeared asleep.

“I will start with the Hawthorn Football Club. Thanks so much for the opportunity you have

“That is the last time that I will give you a mention.”

He did however praise the tactical master for his belief in him when he first walked in the doors at Hawthorn.

Next: Paperwork Costing Tradies $120,000 of Work Each Year

Direct to your Inbox

Get the latest news from Everthought Education